Last week we showed you how we analyzed 2.2 million tweets associated with Super Bowl 51 to gauge the public’s reaction to the event. While the Atlanta Falcons and New England Patriots waged war on the field, a battle of ever-increasing popularity and importance was taking place off it. We are of course referring to the Super Bowl ads battle, where some of biggest brands on Earth pay top dollar for a 30-second slot during one of sport’s greatest spectacles.

With roughly 35% of the US population tuning in to watch this year’s Super Bowl, it’s easy to see why brands pay what they do to be involved, which is in the region of $5 million for 30 seconds of airtime. Breaking it down, that’s over $166,000 per second!

So after analyzing how Twitter reacted to the game itself, we wanted to once again dive into the much anticipated and scrutinized battle of the brands, this time by looking at both Twitter’s reaction as well online news content.

In particular, we were interested in uncovering and investigating the following key areas:

To do so, we looked at both Twitter and the news.

We used the Twitter Streaming API to collect a total of around 2.2 million tweets that mentioned a selection of game and team-related keywords, hashtags and handles. Using the AYLIEN Text Analysis API, we then analyzed each of these tweets and visualized our results using Tableau.

Prior to the Super Bowl, we looked at and analyzed brand mention volumes in online news in an attempt to predict how the public would react to their ads when they aired during the game.

From our analysis, we selected our top 3 Super Bowl ads to watch out for and made predictions for each. We’ll expand on each prediction below and also look at the performance of some other interesting brands. Here are the brands we analyzed;

You can also check out the original blog post here: Using NLP & media monitoring to predict the winners and losers of the Super Bowl 51 ads battle.

So without further ado, let’s see how we did!

To begin, we wanted to see which brands performed best in terms of tweet mentions. How many tweets contained a mention of each brand?

The chart below shows how brand-related chatter on Twitter developed before, during and after the game.

Straight away we can see that two brands in particular considerably outperformed the rest when it came to spikes in mention volumes; Pepsi and Avocados from Mexico.

These two brands along with Budweiser make up our top 3, with the others really failing to make much of an impact in comparison.

Perhaps the most interesting observation from this chart is the double volume spike for Pepsi, which came pre-game and mid-game. Let’s take a look the reason behind this;

In terms of tweet mention volume, Pepsi was a clear overall winner. The beverage giant focused their efforts on generating awareness around two new products; LIFEWTR and Pepsi Zero Sugar. LIFEWTR was given it’s own commercial in the first quarter, while Zero Sugar sponsored the halftime show.

Judging by the sheer volume of tweet chatter around Pepsi, you might assume that their ad and new products have been well received by the viewing public. However, as we predicted prior to the game, Pepsi’s high mentions volume was mostly down to the fact that they sponsored the halftime show, that starred Lady Gaga. The two spikes visible in the chart below actually have very little to do with either product. Rather, they represent 1) a barrage pre-game good luck Gaga tweets and 2) Twitter’s reaction to the singer’s halftime show performance.

The chart below shows volumes of positive and negative tweets before, during and after the game. It should be noted that the majority of tweets collected have neutral sentiment, and offer no opinion either way. We therefore exclude tweets with neutral sentiment.

Less than 5% of tweets mentioning Pepsi also included mentions of LIFEWTR or Zero Sugar, such was the dominance of Lady Gaga on Twitter. While Pepsi had a strong brand presence throughout the event, they perhaps failed to highlight their two new products. The chart below compares mentions of Pepsi and Lady Gaga, with an obvious winner;

Further evidence of Pepsi’s apparent failure to highlight their new products comes from the LIFEWTR ad performance on YouTube, which currently has 1.2 million views. When compared to the likes of KIA and Mr. Clean whose ads have 21.6 and 14.5 million views respectively, you can see how little of an impact the commercial had on viewers.

Budweiser’s Super Bowl ad, titled Born The Hard Way, depicts Adolphus Busch, the co-founder of Anheuser-Busch, arriving in the US from Germany with a dream of opening his own beer brewery. With the immigrant-theme and opening line “You don’t look like you’re from around here”, the ad unintentionally fuelled a political debate online as Trump supporters saw it as a clear dig at the President’s planned travel ban, while Trump opposers saw it as political statement and celebration of immigrant history in the US.

The high volumes of both positive and negative tweets certainly backs up our prediction of Budweiser airing the most controversial ad of Super Bowl 51. While positive sentiment outweighed negative throughout the event, it is clear to see there was a strong split in opinion here.
As expected, the ad itself was minimally discussed on Twitter. Rather, it was seen as a political statement and one that many felt they needed to be either for or against. On one side of the fence, we had tweeters threatening to never buy Budweiser products again and using #boycottbudweiser in their tweets.

On the other side, we had people declaring their love for the brand, and encouraging others to go out and buy the beer!

@mmpadellan I don’t even like Budweiser, but now I’m going to buy three cases of it. #boycottbudweiser my ass. Well done @Budweiser

Idea of the day to restore America: Drink a Bud to show the #BoycottBudweiser haters that we’re still a nation of immigrants.

Although Budweiser claim the ad was shot in Summer of 2016, long before the current controversy around Trump’s travel ban came to the fore, we are left to wonder whether their timing was mere coincidence or a well planned publicity stunt.

Snickers made Super Bowl history this year by being the first brand to perform and broadcast their commercial live during the event. With the intrigue of a live performance, as well as the inclusion of superstars like Betty White and Adam Driver, we were excited to see how this one played out, particularly the reaction on social media.

While we did pretty well predicting the reactions to both the Pepsi and Budweiser ads, we’ll put our hands up here and admit we got this one wrong!

Overall, mentions of Snickers on Twitter were very low. From the tweets we did gather, the vast majority of them had neutral sentiment, meaning viewers really didn’t feel strongly about the ad either way.

Whether they are well received or not, great ads tend to make people feel something. Unfortunately for Snickers, their innovative approach and live broadcast wasn’t enough to make up for an ad that failed to make viewers feel anything, and ultimately it fell flat.

Lady Gaga vs. the brands

We showed earlier the impact that Lady Gaga had on Pepsi’s tweet volumes, but to really drive home the full extent of Twitter’s reaction to the singer during the Super Bowl, we’ve compared total tweet volumes for each of the three brands we’ve looked at in this post and compared them to Lady Gaga’s.

Now that we’ve looked at some of the public reaction to Super Bowl 51 on Twitter, we wanted to also look at how at how the news reacted to the event, and in particular the ads battle. To do this, we began by looking at the most mentioned keywords in news stories mentioning “Super Bowl” and “ad” or “commercial”.

What were the most talked about Super Bowl topics in the news?

The bubble chart below shows the most mentioned topics from online news content in the week immediately following the Super Bowl. The bigger the bubble, the higher the mention count. You can hover over each bubble to view more information and data.

It’s hard to escape politics these days, and the Super Bowl was no exception. With the likes of Budweiser, Airbnb, 84 Lumber, Audi and Coca-Cola all airing ads that related to the current political climate, it is no surprise to see these brands mentioned most alongside political and Donald Trump.

With brands mostly dominating the previous chart, we decided to narrow our focus on the individuals who were mentioned most. Again, Donald Trump tops the list, followed by Lady Gaga, Melissa McCarthy (KIA ad) and Justin Bieber (T-Mobile ad).

As we touched on in our previous post, the modern-day Super Bowl is becoming increasingly less about the game itself, and more about the surrounding hype, entertainment and commercial opportunities that come with an event of such magnitude.

With top brands spending a minimum of $5 million for a 30 second commercial, what seems like a heavy investment can result in a big increase in brand awareness as viewers promote ads through shares and likes on social media. There is uncapped potential for these ads too. Create something special that connects with, amuses or fascinates viewers and your ad may be viewed and shared for years to come.

Thanks to advancements in Natural Language Process and Text Analysis, brands can analyze ad performance down to the minutest of details and gain powerful insights in their quest to create commercial content that resonates with viewers. 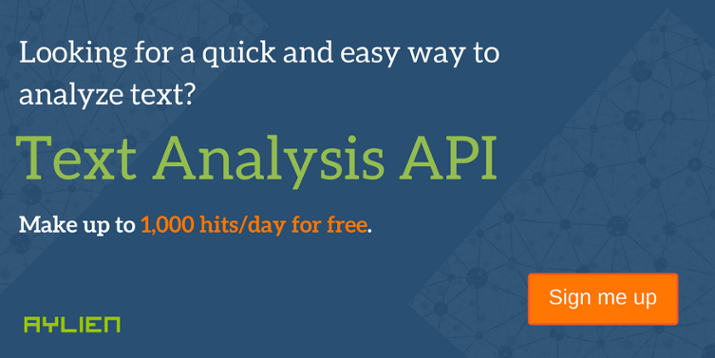 A graduate of the Dublin Institute of Technology and Digital Marketing Institute in Ireland, Noel heads up Customer Success here at AYLIEN. A keen runner, writer and traveller, Noel joined the team having previously gained experience with SaaS companies in Australia and Canada.

Last Friday we witnessed the start of what has been one of the biggest worldwide cyber attacks in history, the WannaCry malware attack. While information security and hacking threats in […]

Welcome to the seventh in a series of blog posts in which we use the News API to look into the previous month’s news content. The News API collected and […]

Twitter users around the world post around 350,000 new Tweets every minute, creating 6,000 140-character long pieces of information every second. Twitter is now a hugely valuable resource from which […]